I had been waiting for BDJ to release a box filled with just makeup since I missed their May issue, which was a three-brand-exclusive box that featured products from Maybelline, among others. 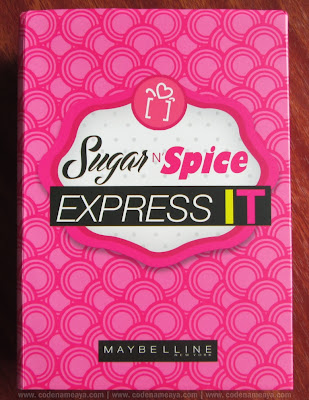 The theme for this month? Express It with Maybelline! The October BDJ Box is a Maybelline-exclusive one, available in six different themes - Sugar N Spice, Femme Fatale, Runway Rock, Queen of Extreme, Scene Stealer, Wild Thing.

But it's Sugar N Spice for me!

Oh, by the way, let's not forget that it's been a year since BDJ Box released their first ever issue! (Read about the first BDJ Box *here.*) Wow, congratulations, BDJ, on a successful first year!

Sugar N Spice box - designed to amp up your everyday look. Flirty fun as the girl next door!

Inside are six full-sized makeup items that are already enough for a basic natural, everyday look.

I know most of these items were repeats from the May box, but for someone who missed the May box, I'm pretty happy with the contents of the October box.

Over-all, I'm really happy with this month's box! When am I ever not happy with the BDJ boxes I get?! No, seriously, I do like that it's an all-makeup box. I get that skin care items are easier to sample out, but I feel like I have enough skin care products right now, especially since my current skin care routine is pretty basic. I also like that the box features products from Maybelline, which is one of my favorite drugstore/dep't store brands.

Oh, by the way, this box is valued at around P1900, which means that if you subscribed to this box, you'd get a box worth more than thrice the P580 subscription fee you paid! Not a subscriber yet? Visit bdjbox.com and @BDJBox on Twitter and Facebook for more info!

Did you order the October BDJ Box too? Which type of girl are you? Share your unboxing posts by commenting below! :)


Disclaimer: Box was received for free, but the views and opinions expressed in this post are purely mine and based on my own experience with the products inside it.