Maybelline mascaras are probably one of the most raved about drugstore mascaras. Call me a late bloomer, but I actually just got to try a few of them. Today's post is about the popular... 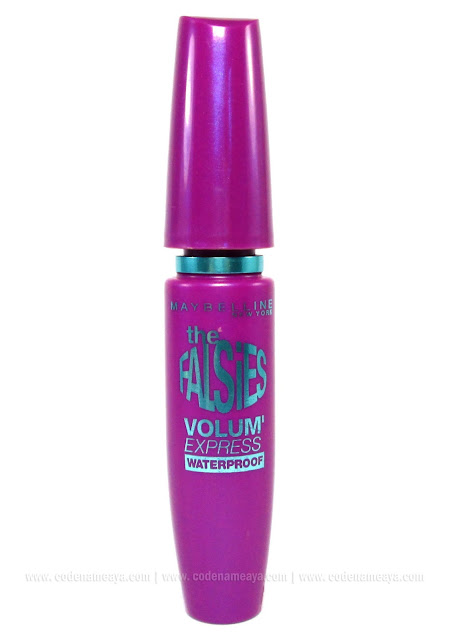 This was the first mascara I got to try from the brand. I actually won this from Maybelline's contest many months ago. Yes, this review is a super late post yet again! Hahaha. View my haul post *here* ;)

Let's take a look at the brush first.

The bristles are short and soft, and the brush is slightly curved. The wand is flexible, and the 'snipped' part of the wand that you can see in the lower left portion of the photo above is the point where the wand bends. While the flexible wand did help juuust a bit in lifting the lashes as I applied the mascara, I honestly still wouldn't mind if the wand wasn't flexible. To me, it didn't make that big of a difference.

I really liked the curved brush, though! I liked how it was able to grab and indeed 'fan' my lashes out. I also feel like it helped hold the curl of my lashes during mascara application.

The mascara formula was more on the watery side when I opened the tube for the first time, then it dried a bit quickly in the tube as the weeks went by. After a few weeks, the mascara had a noticeably drier texture although it still wasn't hard to work with. On my lashes, the mascara felt light, and it didn't make my eyes water, which was good because my eyes water easily. I like that it didn't leave my lashes stiff and stick-straight.  It was actually able to hold the curl! I'm guessing the waterproof formula and the curved brush had something to do with that.

This mascara didn't flake nor smudge on my oily lids throughout the day. I put its waterproof claim to the test by splashing my face with water. I didn't see any smudges right after, but when I tried to lightly wipe my lids while they're still wet, the mascara flaked a bit. I didn't experience further flaking once the mascara had dried again, though. So I guess I can say it's indeed waterproof, just not smudgeproof when wet.

Now, I know you're waiting for the before-and-after photos, so here they are!


As you can see in the photos, The Falsies really helped open up my eyes by lengthening and volumizing my lashes. I must admit, though, that while it did give my lashes a noticeable increase in length and volume, it didn't make my lashes look like falsies in just 1-2 coats. Not something I expected from a mascara named 'The Falsies.' I noticed my lashes started to look like falsies after 3-4 heavy coats of this mascara, though. Case in point...

(Note: The mascara was already super dry when I used it for the following photos (way past the 3-month period). That's why my lashes look really flaky in these photos.)


In my case, piling on the mascara gave more volume than length. Also, I noticed that after a few coats, my lashes would start getting clumpy. I honestly don't mind clumpy mascaras (as long as they're not super clumpy) because when it comes to lashes, I need all the help I can get! Hahaha! You've seen the 'before' photos, so you know that my bare lashes are almost invisible! I wouldn't mind a little clumpiness as long as it would give more volume.

Being a waterproof mascara, it was a bit tougher to remove than the previous mascaras I had tried. Nothing that my makeup remover couldn't handle, though. I just had to swipe a few more times to make sure there were no traces of mascara left.

I didn't buy this, as I've mentioned, but I believe this is priced at around P450.

Over-all, I liked Maybelline's The Falsies because it was able to give my lashes the length and volume boost they needed. I just wish it were more lengthening and volumizing, so I wouldn't have to pile on coat after coat to get a natural-looking falsies effect. It's called The Falsies, after all ;)